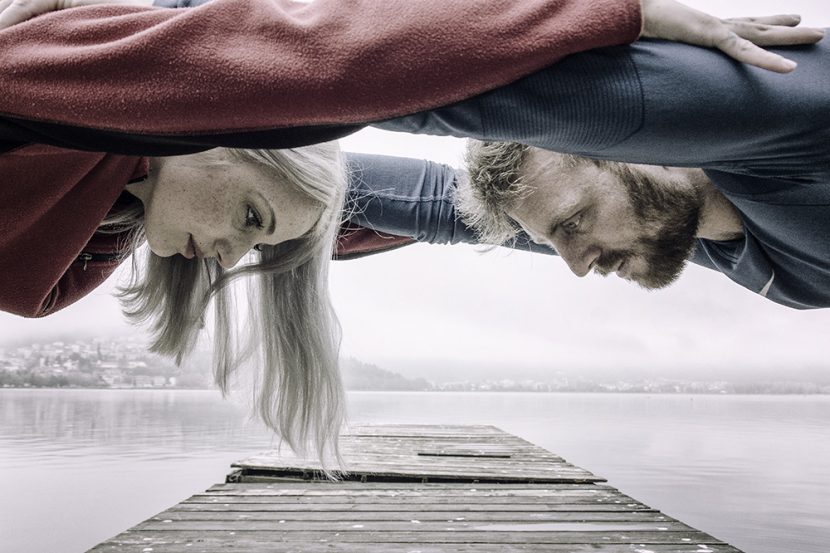 A lot of us spend a big part of the day indoors, working under fluorescent lights and in front of screens. After work we’re back on our way home just to spend more time eating, relaxing and falling asleep in front of a TV or tablet watching Netflix. Because we move so little we try to find an extra hour somewhere between our busy schedule and go work-out at the gym. But, that just means spending more time surrounded by bricks, cement and artificial light again…

To sum it up, we spend very little time in the open-air and we don’t move that much. Most of us already know about the repercussions a lack of exercise and movement can have on our health… But, that’s not the only deficiency our lifestyle creates. Another big issue seems to be a lack of exposure to the outdoors. Medical experts nowadays are seeing growing research on how spending time and moving in places such as forests and green parks is becoming more and more essential for our physical and mental health!

Research has shown that even in countries such as Greece (where I’m from), people are deficient in vitamin D. Quite unexpected since my country is one of sunniest places on earth and as you probably know – most of our body’s vitamin D requirements are meant to be covered through exposure to sunlight. Vitamin D deficiency seems to be a global problem with very few areas spared (1). Low levels of vitamin D are related to depression as well as other mental disorders and health problems (2)(3).

On the other hand, exposure to natural light and the outdoors are strongly linked to increased energy, improved mood and sleep, and overall better life quality (4). Exercise is also associated to the same benefits but… would combining them both have an amplifying effect on our vitality and psychology? Research seems to show so! Compared with exercising indoors, people exercising in natural environments experience greater feelings of revitalization and greater decreases in tension, confusion and anger. Especially when it comes to mood and severe cases such as depression, while any form of physical activity helps, there is growing evidence showing how physical activity in nature has larger positive effects (5) (6).

Outdoor exercise won’t get you out of a serious condition such as depression. But I believe that it can be clinically useful as a supplementary activity to existing treatments for mental problems such as anxiety. That is of course under the supervision of a specialist.

Having a personal training practice that focuses mostly at training outside, I often hear from my trainees how they find outdoor exercise a lot more enjoyable and easier to stay consistent with (compared to training indoors in the past). Some of my trainees even prefer training in light rain than going indoors! You don’t just have to take my word though on this. There is actual science backing it all up! Studies comparing indoor to outdoor training have reported greater enjoyment and satisfaction with the latter. The main conclusions seem to be that  outdoor exercisers feel a) more engaged while exercising and b) more motivated to repeat the workout in the near future once they’re done (5) (8)!

What if I told you that there’s a special kind of fat in your body that is metabolically more active (it actually burns calories instead of just storing them)? A type of that can even protect you from obesity and other diseases such as diabetes (7)? Don’t worry, this fat won’t get in the way of your six-pack… It will actually support your physique goals! The fat I’m talking about is called brown adipose tissue (BAT) or simply brown-fat and up until 2007 we didn’t know a lot about it.

BAT is an important primal mechanism, meant to protected us from cold by breaking down fatty acids in our body and converting them into heat. The more prevalent cold is in our lives, the more this mechanism is activated. Contrary to regular fat that is an evolutionary adaptation for storing energy in times of food-scarcity, BAT uses energy to keep us warm in moments of heat-scarcity. Cool, right?! Besides exposing yourself to a bit more cold, BAT is also activated through exercise. So once again, here’s an idea! Why not use the colder months of the year as an opportunity to combine both cold-exposure and exercise to boost your BAT to the max?

I know a lot of people might find this a bit intimidating or risky in terms of getting sick. Sure, there will be days during which training indoors is unavoidable. But, you can train outdoors during most of the year if  you’re a bit methodic. As with most things, progressive overload is key! Meaning, you want to continue training with light clothing after the summer, through the fall and slowly add a few layers if needed as the temperature drops coming winter. Keeping your extremities warm without overdressing your core is another crucial factor. Personally, after three years of experimenting with such methods, I’ve reached the point that I don’t need more than a t-shirt and sweatpants to exercise during the winter (assuming it’s not windy or raining). I’ll be creating more content on how to do this methodically so stay posted…

1. Self-esteem: Research shows that green environments also have the potential to improve self-esteem (9). Exercise is another activity that improves self-esteem, yet I didn’t find research examining if these two combined can have an amplifying effect. Based on anecdotal evidence such as my personal experience and the feedback I get from my trainees though, I’m pretty sure this is the case.

2. Improved eye-health: Outdoor time seems to also be linked to better eyesight. Research shows that spending more time outdoors might be a simple strategy by which to reduce the risk of developing myopia and its progression in children and adolescents (11). Exercise also shows to be good for reducing risk of cataract and glaucoma. I remember a period during which I used to work most of my day in front of a computer and my eyes would get swollen and red. One of the few things that relaxed my eyes was training outside in the woods. This makes sense since research suggests that spending a lot of time focusing on close-up objects such as smartphones, laptops and even books is stressful for your eyes. Therefore, either you’re a student or work at an office, giving your eyes some open space and natural light for them to relax is as important as getting some exercise on a daily basis. So, once again… why not kill two birds with one stone and mix these two.

3. Lower blood pressure: Studies also show that people who made long visits to green spaces had lower rates high blood pressure. The same is shown for exercise so combining these two again is a no-brainer (12).

4. Increased creativity, focus, memory and problem-solving skills: In one study, researchers gave three groups of people a proofreading test. The first group did the test after a walk in nature, the second group after a walk in the city and the third after simply relaxing. Guess which group scored way higher at the test? Yup, the first one (13). Other studies have shown that moving in natural environments can increase problem-solving skills up to 50% (14) (10)! Some of my trainees are students in challenging fields such as medicine. In our conversations, they’ve told me that taking a break from studying to exercise outdoors with me helps them a lot more with their cognitive performance compared to when they used to train in a gym.

5. Social connection: Studies have also shown that exercise in natural environments may also promote social interactions which can also positively influence people’s intention to train again in the near future (5)(8). One thing I often observe when I train groups of people in the outdoors is that almost everybody is more relaxed and approachable.

6. Spending time outside reduces inflammation and might lowers risk for autoimmune disease

Getting a healthy dose of exercise is one strategy to decrease your inflammation levels. Excessive inflammation in our body is associated with a wide range health problems including autoimmune disorders, inflammatory bowel disease and cancer (16) (18). Studies show that spending more time in sunlight and nature is another thing that decreases inflammation. There is also research showing that people who spend more time indoors without a lot exposure to natural light seem to be more prone to cancer (21) (22). Finally, some research has also shown that spending time in forests stimulates the production of anti-cancer proteins which may last up to seven days after the visit is over (15). Overall forests seem to strengthen the immune system but this area of research is still quite new and needs to be further explored (17). We still need more research to validate a strong claim such as that training in the outdoors can be anticancerous, but I definitely believe it can act as a good anti-inflammatory supplement.

TIP 1: Get started! If you’re just getting started with exercise – any place will do. Even a few push-ups in your apartment every morning are a great starting point. When I started getting back in shape after six years of not doing anything, I trained at home for three whole years and got great results (link)! It did become boring after a certain point though. After that, I found out that training outdoors can take your health and fitness to the next level.  It is one of the best ways to decompress from work, studying and the city. It will energize your body while simultaneously calm your mind. Things most of us are looking for nowadays…

TIP 2: Build accountability! A lot of people I train tell me that they first think of training outdoors as either challenging, boring or even awkward. After they give it a try though, 99% of them get into it. If you don’t know where to begin from or if you need an extra boost of motivation or someone to hold you accountable – I highly recommend hiring an outdoor personal-trainer. Even if this is not within your long-term budget, just a few sessions to get you started can be very helpful.

Another great way to build accountability and get over feelings of awkwardness you might have while training alone outside, is having a group of people to train with. Try to have a group-session with friends or people from the office at least once a week. Besides being enjoyable to feel connected with others in the outdoors, having other people waiting for you will also make it less likely that you’ll skip a workout when feeling tired on a Thursday afternoon or lazy during a Sunday morning.

Even if you live in a big city, there’s probably a forest within a reasonable driving-distance. Got no car or time for that? Then you probably also have a local park with some grass and trees somewhere within a 5-minute jogging or biking-distance. So, drop the excuses and get outside and move!

3. Vitamin D and Depression: Where is all the Sunshine?

4. Vitalizing effects of being outdoors and in nature

8. Influences of Green Outdoors versus Indoors Environmental Settings on Psychological and Social Outcomes of Controlled Exercise

9. What is the best dose of nature and green exercise for improving mental health? A multi-study analysis.

10. Interacting with Nature Improves Cognition and Affect for Individuals with Depression

11. More Time Outside Tied to Less Nearsightedness in Children

14. Creativity in the Wild: Improving Creative Reasoning through Immersion in Natural Settings

19. Interacting with Nature Improves Cognition and Affect for Individuals with Depression

20.The Cognitive Benefits of Interacting With Nature

21. Sunlight and Reduced Risk of Cancer: Is The Real Story Vitamin D?

RECOMMENDED BOOKS BY ME

How to Sculpt a Greek God's Chest with Push-ups 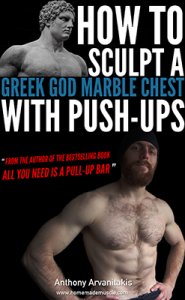 How to Carve a Gymnast's Ripped Back with Pull ups 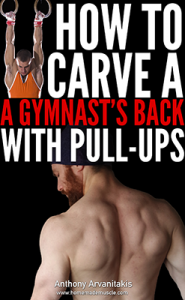